That is most certainly a mouthful: Commissioner for Complaints for Telecommunications Services, or CCTS are a private, not-for-profit corporation that is funded by Canada’s participating telecom companies (like Bell, Rogers, Telus, etc). In fact, the CRTC forces the telcoms to pay into this and participate in complaint resolutions or risk CRTC’s wrath. This month, the CCTS released a report about the mass of complaints they’ve received, some case studies and a heck of allot of interesting information about how we handle this process. Let’s take a closer look.

You haven’t heard of CCTS? Well, I suspect there are a lot of Canadians that haven’t. Perhaps one of the most important things about the CCTS is the power they wield. It appears as though they can’t directly shut down a telecom, but they “…have developed a process by which we refer these providers to the CRTC, which takes measures to enforce the ruling.”

Surely, there are cases where this ruling results in the CRTC taking disciplinary measures against the telecom provider.

The Report
Recently released  by CCTS, the annual report has been widely reported on by a number of media outlets. You can certainly read it yourself, but some of the interesting highlights you’ll find:

1. The biggest statistic – overall complaints were up 35% in this last year going from 8,007 to 10,838
2. Number of times CCTS issued a “Decision” (not exactly binding, but a final stage): 11
3. Biggest Complaint Issue: Issues related to billing
4. Portion of all complaints and issues that were Wireless related: 7,221 (60.2%)
5. Number of complaints that providers ignored altogether: 1,400
6. Number of providers that tried to charge their customers for complaining to CCTS: 1
7. Complaints this year regarding Early Termination Fees with wireless providers: 728
8. Number of complaints about Intermittent Service: 808
9. Number of resolved complaints that resulted in compensation of $5,000 or more: 16
10. Provider with most complaints: Rogers/Fido/Chatr: 34.33%
11. Region with the most complaints: Ontario, The least: Yukon

Wait, can’t I just complain to my telecom?
That is what seems so fascinating about the complaint process in Canada. Since the telecom companies are paying for this service (and are forbidden to pass the cost on to customers directly), it would seem that some companies are using this as their complaint department. In a sampling of websites, I looked the order of contact steps listed just after a mention of “making a complaint” or “if your situation is not resolved“: 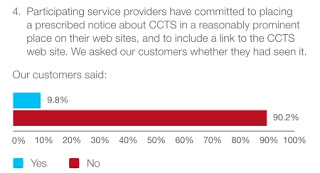 In each case, the CCTS was mentioned on the complaint page (and, in the case of Rogers, prominently). I’m curious if telecom companies are forced to include this information. In every case of mention, the text says: “independent of the telecommunications industry”, but does not explain that the telecom industry is responsible for funding the CCTS. Interestingly, the report has a survey of it’s customers and included a question about whether providers had notices about the CCTS on their websites.

What do they pay?
Interestingly, this doesn’t look like it’s based on number of complaints. It’s actually based on something called TORs or telecommunications operating revenues. The company with the larger chunk of revenues pays more of CCTS’ costs. Here’s how it breaks down (based on this CRTC ruling): 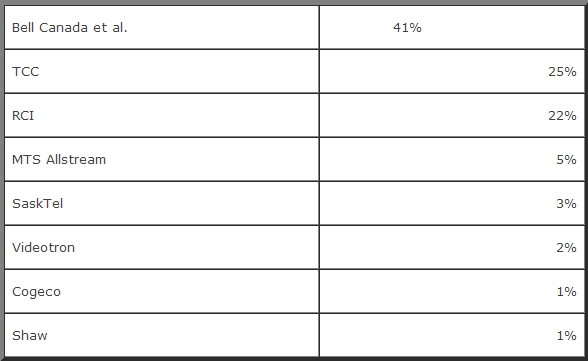 RCI is Rogers and TCCs are all the smaller guys, including WIND Mobile. There’s a full list here. I would think that, if it were based on number of complaints, it may actually force a culture change in telecom companies.

Making a complaint to the CCTS is done by way of their nifty online complaint form.