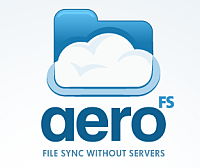 To our joy, we were recently invited to join a beta of AeroFS by Air Computing. AeroFS is a cloud file storage and syncing tool much like that of DropBox, but with some key differences. The biggest difference is it’s ability to sync files in a local peer-to-peer fashion, ruling out the need for cloud help or even an Internet connection. Secondly, file sharing is quite different from what you’d expect in an application like this. The limitations of Cloud-based storage tool  have always been sizing the cloud storage, but what if the storage you provide is your own? Let’s take a closer look at AeroFS.

The installation of the client application is straightforward. You’re taken through a few steps and asked to authenticate with the Internet-based AeroFS servers (presumably to setup the computer with an encryption key and download updates). The setup process places the AeroFS folder in the current user’s “Documents” folder (and likely a Favorite on OS X). The AeroFS client follows the same rules as DropBox regarding folder names. When attempting to reassign folders, the “AeroFS” folder has to exist with that name no matter where you decide to move it.

Once AeroFS loads, it opens a crap-load of ports and, by all accounts, it starts looking for other devices it can sync with on the local network. For those curious, here’s a full list of the ports that opened after installing on a second, Windows 7 computer (WIN-BM6JQG7PK67 the computer name of the first, and WS-B1Y4C1 the second). It seems clear that AeroFS uses allot of local ports and even connects to Amazon’s AWS service.

Peer-to Peer Magic
Not needing Amazon’s servers (and the Internet for that matter) is the “magic” of AeroFS. The company explains the key feature this way:

“Communication happens peer-to-peer, so any two or more devices can talk to each other directly, without a middleman server, and regardless of whether you’re on a corporate LAN, on the Internet, or in any other network.”

We put that to the test. First, we set up two computers with a single file and installed AeroFS and let it sync that one file. Next, we completely disconnected the Internet to all computers on the network. Lastly, a bunch of files were copied into one of the computer’s AeroFS folder and we watched what happened. If this were DropBox, files would not synchronize. As we added files, AeroFS promptly started to synchronize them, all while disconnected from the Internet.

The local-centric operation of AeroFS also changes how files are managed and shared. With other services, files are transferred to the cloud server and a web interface is provided if you wish to open, download or share the file. AeroFS doesn’t seem to have anything like that (right now, anyway). It’s not even entirely clear  how much data is actually transferred to the AeroFS servers, if at all. One of the more interesting parts of the AeroFS terms of service was written all in capitals:

“BY UTILIZING THE SITE, CONTENT, FILES AND/OR SERVICES, YOU CONSENT TO ALLOW AEROFS TO ACCESS YOUR COMPUTER TO ACCESS ANY FILES THAT ARE PLACED IN THE ‘AEROFS’ DRIVE/VOLUME, AND/OR ANY OTHER FOLDER WHICH YOU CHOOSE TO LINK TO AEROFS.”

Update: This is no longer a current passage.

The peer-to-peer syncing alone is a great feature. We can think of a number of different possibilities where a server that shares files might be replaced with this sort of distributed method of syncing files. This way, many copies of your share would be available on trusted computers, and all files would be up-to-date. Also part of AeroFS is file versions, allowing you to revert back to previous versions of files that were synced (it’s not entirely clear if this uses File History/Shadow Copy or not). 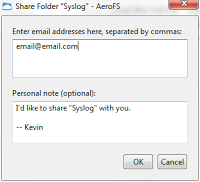 File Sharing with AeroFS
The process of file sharing was probably the most unusual. Sharing had to be done at the folder level (and cannot be done on a per file basis). To share, you need to right click on a folder in your AeroFS root and click on the AeroFS context menu. You’re given a screen that let’s you invite by way of an email address. No links are provided, short or otherwise in this window.

When the email is received  the person you’ve invited is directed to install the AeroFS client application with an invitation code. The person must create an account on aerofs.comand gets a synced copy of the folder you just shared. Any updates you make to that folder are also sent to that user your sharing with. What’s nice is that users appear to be given the option of adding multiple folder invitations (presumably by multiple users). And again, once setup, the invitee becomes just another member of the group. All changes made by him/her are synced and received in that folder.

We can certainly imagine a file structure where a company may install AeroFS at the head office and create the root – then, each branch office’s documents are synchronized to the various mobile and desktop workers in a manner like this: 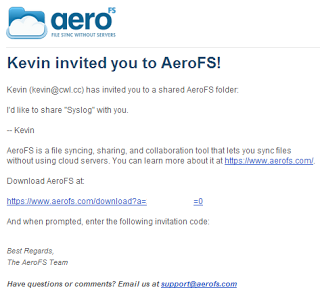 None of the branch locations see the other’s folder, but the root account sees all the folders (and can backup to a local media store for global compliance). In our basic tests, file permissions that don’t give the AeroFS client permission to change or delete files, result in no changes. We were also able to retrieve deleted files from the root of any folder (as a previous version). The sharing root can revoke or “Kickout” any user using the folder controls. After the revocation, files are kept in the last synced state on the revoked user’s computer – but receive no updates.

AeroFS currently runs on Windows XP/7/8, Mac OS X and Linux. Clearly interested in iOS and Android clients, AeroFS is also hiring Engineers targeting those platforms. What’s not clear is how AeroFS plans to monetize the platform. Given that that charging for storage amount would be difficult (it would be your own storage after all) – finding the right kind of pricing strategy seems elusive, though an October mention of pricing promises “No Surprises”.

Conclusion
We like where AeroFS is headed. The idea of creating a sort of hybrid local and cloud based storage seems like a real winner, if it can work out the most efficient use of the cloud. A service like this, done well, has the potential to reinvent the idea of file sharing and mobile storage. Add Active Directory support, mobile platform support , direct file sharing and the potential is there. Beyond the possible business cases here, a number of interesting uses could pop up much in the same way Dropbox gets used in all sorts of unexpected ways too.