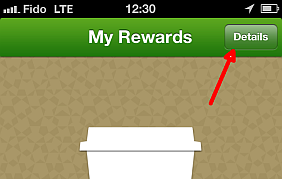 Not to long ago, Starbucks made a bunch of changes to how they handled their Starbucks Card promotions. Some of the changes were good (12 drinks now get you a free drink), but some other changes are clearly causing some difficulty. One of the bigger problems is how someone might redeem a free drink now that Starbucks no longer sends out postcard-sized redemption cards.

I’ve spoken to a few people that have been confused or under-informed about this new process. You stop getting postcards about free drinks but continue earning rewards. Even worse, you may not hear about earning the free drink reward because no email or letter accompanies the milestone. The rewards add up, but you may be unaware of how to redeem them. I’m going to show you how to find out what you’ve earned, and how to redeem the reward.

Also, I should note that what I describe is for the iOS Starbucks app. The process should be similar on other platforms but may vary slightly from the interface to interface.

To check if you’ve earned a free reward:

1. Open the Starbucks App, click on the “Rewards” button 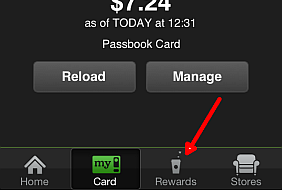 2. You’ll see a big cup that shows your star count (since the last time you hit 12). Here you’ll want to tap “Details”. This page, interestingly enough, does not show that you’ve earned free drinks or food.

3. On this screen you can finally tell what free rewards you’ve earned. The number to the left of a small cup with a star in the middle signifies the number of free drinks or food you can get. 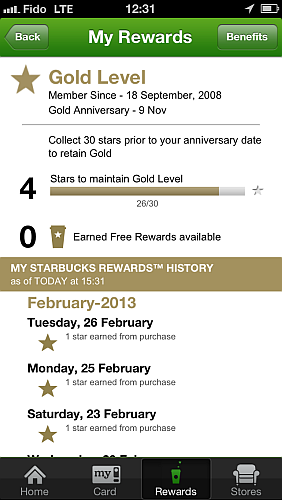 Take Note! These rewards will expire. Since this is all computerized, there is little chance you’ll get the free drink you’ve earned if you let it expire. Here’s a look at an expired reward:

In a recent app update (Version 2.6) Starbucks is apparently getting the message. You can now see what rewards you’ve earned right in the rewards screen itself. It looks like this: 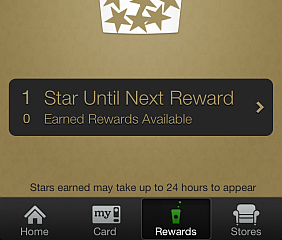 To Redeem a free drink or food item:

1. Open up the app or check the website to make sure you’ve earned at least one free reward.

2. Let the Barista know you have a free drink. With your Starbucks card or the Starbucks app barcode, the Barista will scan your card and validate the free reward. Enjoy!

Some tips to make sure you keep getting rewards:

1. Be sure to keep your web profile up-to-date. Make sure the email address listed is valid and you can check SPAM there. I’m told by Baristas that reward notifications are supposed to be sent via email. When that works, you’ll want to get them.

2. Check your rewards level often. Make sure you know when a free drink has been earned. Free drinks include anything! You can get a $10 drink from a free reward.