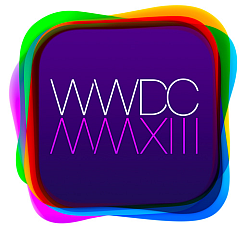 If there is one event to cover every year, you couldn’t go wrong with an Apple event. Happening June 10 at 10 am PST, Apple’s Worldwide Developer Conference is expected to draw the attention of everyone in tech seeking out what’s next in technology.  Right now, Apple is at somewhat of a disadvantage as products like Android are leaping ahead with new tools and wearable devices. Much of the speculation about this event revolves around a possible watch and a new iPhone.

For those interested in watching, Apple has a live stream setup on their events page.

As is often the case when watching an Apple event, rumours about what will be announced are rampant. Sometimes way off the mark, sometimes right on. Let’s take a look at the current list:

1. A new version (7) of iOS, is expected to see a significant visual overhaul. Rumors are that the interface will be flatter, less skeuomorphism, and possibly leaning more towards the look of Windows Phone.
2. A new radio service, much like Spotify, that lets users stream unlimited music – for a price.
3. Big Changes to OS X may be on the list. Among them, a closer connection to iOS and possible new advanced features.
4. A possible wearable device, with a watch or even a bracelet. Apple may be ready to unveil its first wearable connected device to the masses.
5. Hardware updates, probably the biggest certainly of the event. Something will get an update. Expect a retina iPad Mini.

We will see. Stay here for updates on the event, announcements and my thoughts on Apple’s new crop of stuff.

6 Million Developers. WWDC sold out in just over a minute.  A nice new store in Berlin. The App Store has been around for 5 years, and 50 Billion apps have been downloaded. 900,000 apps in the app store. 375,000 apps built for iPad. 575 Million accounts in the app store. $10 Billion has been paid out to developers thus far. The basic preamble of an event is Apple patting itself on the back. Today’s event is no different.

Mac OS X Mavericks is the next version of OS X. Looks like many of the new features are for power users. Tabs are available in the Finder windows. OS X supports tags that allow users to add basic metadata to files and iCloud stuff. Also updated, are Multiple Displays – giving users more tools with more than one display device (and Apple TV can become a display via AirPlay). A bunch of new updates related to power management. Looks like the new version of Safari will also include some useful Twitter and Facebook integration. iCloud Keychain brings a Keepass-like password management tool. Notifications in OS X look more iOS-y, which is nice. Maps continue to be updated, why people clapped, I don’t know. Also on OS X, iBooks has come to the Mac.

Many of these things were updates when Windows went from 7 to 8. I wonder where the tagging information is going to be located on the system? Is this going to be directly in the file system? It’s all very ho-hum. I expect most users to care very little about these new features.

iCloud up next.. this service was in need of a serious update. Apple plans to integrate iCloud into the iWork suite (with a new product called iWork for iCloud). Apple is really catching up in this regard, so that was to be expected. Available for everyone later in the year. I expected more from this.

iOS and Tim Cook are back to applause. In his comparisons to other mobile OSes, Blackberry and Windows aren’t even mentioned until the satisfaction survey. iOS 7 is real. The OS looks to include a very flat look and translucency. There is even a parallax feature that gives depth to icons. There are a quick settings feature and a new task switcher. iOS draws a standing ovation. Skeuomorphism is definitely gone. New gestures, multiple pages in folders, better use of the full screen, a new control center and new multitasking features. Also updated is mobile Safari. Overall a new swiping gesture allows the user to get back. Camera and photos see some basic photo updates that don’t really hold up to recent Android updates. Automatic app store updates to apps. iOS in the car. Music in the cloud. iOS7 comes in the Fall.

Then, iTunes Radio. The rumored music service is included in the Music app. It appears though this music is an Apple-curated list of stations and user-made custom stations? It appears though it won’t cost anything to listen to music (with ads) and is only available in the U.S. so far. Included prominently are links to buy songs.

Another interesting feature: Activation Lock. Locking out whoever gets the phone from being able to reuse it until an iTunes account is supplied. This could be a serious annoyance for the secondary phone market.

Overall, not really much to work with now, but the iOS 7 update looks like a serious overhaul of the operating system. I would expect to see, at least, a new iPhone and iPad device released before iOS 7 gets into the hands of every user. In some respects, Apple is still behind, but the look and feel of iOS are definitely improving.