The last time I backed a project on Kickstarter, it took the form of an iPhone case called JustMount and TidyTilt+. The project was funded, success and the product made its way to me. Today, I still use the case with my device and have been quite pleased with the results. Thinking of trying again, I came across another cool and interesting project called The Freedman Chair. This one was both more personal because I sit so much, and more of an investment (319 British Pounds). I took the plunge and backed the project on October 27th, 2013. The Freedman Chair was successfully funded less than 48 hours later. This presented me with the opportunity to chart the progress of this project as well as share my experiences both with shipping and the chair itself. 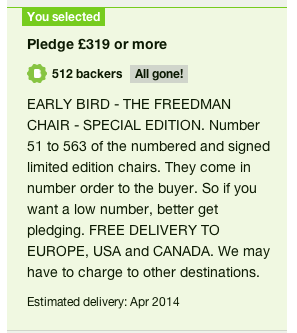 My pledge for The Freedman chair was a second-level early bird. This would mean I’d get one of the first 512 chairs produced. The expected delivery date was set to April of 2014 with free shipping to where I am: Canada.

After being successfully funded, Simon Freedman posted this message in the comments on Kickstarter:

“Many thanks for all the kind emails and messages. We’ve done it and you’ll be sitting your FreedMan Chair early next year!”

Next, it was just going to be a waiting game. As the chair was being made, Simon offered countless updates, even explanations for delays (that would eventually occur).

A full 548 days after adding my pledge on Kickstarter, The Freedman Chair arrived. I was more than elated to see the new chair and finally get to sit on it. Since it was arriving in parts, I was going to need to assemble the pieces (more on that later), but for now, I give you my  Freedman Chair unboxing video:

The instructions provided were basic, with no words, just pictures. The pictures were easy enough to follow. But, once assembled, it was clear that this wasn’t enough, because the base was extremely loose-fitting. I wondered what I got wrong putting it together? The resulting pain left me missing an important black screw and pissed off with the process from the beginning. The lesson here is, don’t expect the chair to assemble easily. You’re going to need help in the form of Simon’s assembly walkthrough.

Here are some tips (if I’m catching you before assembly):

1. The most important part of the process is the beginning cone attachment. Pay close attention to lining up screws and tightening the shaft. Also, when tightening the screw on the cone, wiggle things so it ends up all the way in.

2. Give yourself time and space. Keep track of things. Assembly is slow and tedious. Be patient.

3. If you get it wrong (and the chair is wobbly), you can take it apart and start again. Make sure to remove all the legs or you risk stripping the center shaft.

4. Don’t lose the “black screw”, but if you do, any of the screws that attach the legs can be used.

As I sit on this new chair and write these thoughts, I’m ever-present of the fact that I can no longer slouch. My old chair made it easy to sit back and be lazy, but The Freedman Chair has me in such a better position, I can feel it right away. I can also feel my ass starting to hurt, so I’m probably going to need to adjust. I also notice I’m naturally sitting higher above everything else. Because of that, I’m going to need to make some adjustments, as well as by a new desk.

So far, I’m pleased with the chair, and my neck and back seem to be adjusting well – and thanking me.

Update #1: Well, Simon probably expected people would need to disassemble the chair and build it again. There are even instructions on how to do it.
Updated #2: An email arrives that describes the reasoning for more delays. Given that I was in the early bird category, those who aren’t are going to wait another 3 months to get a chair. Why? Because the company wants to earn money from the chairs they’ve already made. That’s a real blow to those who, after almost 500 days of waiting, still have nothing. 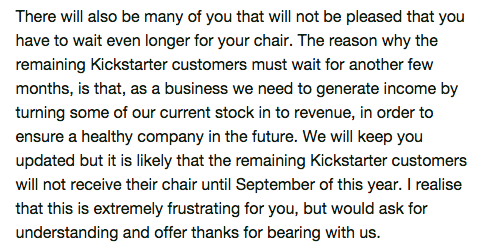 Update #3: In a strange twist, Simon updates all backers acknowledging the difficulties in assembling the chair. 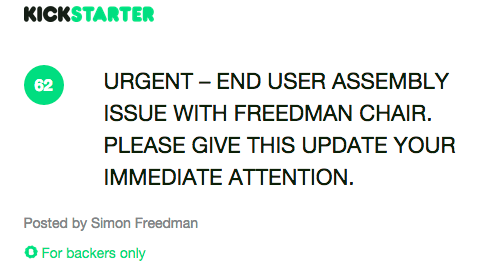 They further offer a big bombshell of a message: “I must advise you, with immediate effect, not to continue using your chair“. This effectively marks every chair as unsafe and unusable. Did something happen to cause this? Was someone hurt because of the challenging assembly? Are all Freedman Chair owners now in possession of the world’s most expensive paperweight? Time will tell.

Are you still waiting on a chair? How do you feel about the process? Would you still invest in this chair if you knew how long it was going to take?

Update #5 – November 2015: As the deafening silence from Simon et al continues, more information is coming in. Based on details out of the U.K, The Miracle Chair Company (makers of the Freedman Chair) appear to be “In Administration“. Given this, the company is likely insolvent and may indeed be inching towards failure and/or liquidation.

What about Kickstarter? I’ve been asked a few times about what Kickstarter’s role would be in this debacle. Kickstarter makes it clear when creating a project that creators must ship promised rewards or provide a refund. This is legality as far as Kickstarter is concerned. How that works with the company in Administration and located in the U.K. is harder to understand. It’s unclear if you can get money back unless it is volunteered by the company.

Far more troubling is the situation for those who have received chairs already (including myself). Since the product has been fulfilled for us, Kickstarter has no role in our misgivings. So, for everyone that has gotten a chair and seen it broken or unusable, we’re out of luck outside of legal proceedings.

Update #6 – Off-topic, but another Kickstarter project looks to have a similar (but worse fate). The “Coolest Cooler” project found itself wildly successful in gaining funding; to the tune of 13.2 million dollars. On Feb 26, 2016, they sent out an update to backers saying they’d run out of money. This, and they have not yet shipped a single cooler to backers.

“That reality was known last year, but we forged ahead. We were confident in our company and the market for premium quality coolers, which had absolutely exploded. We knew that the Kickstarter funds, in the end, would not cover the actual cost of fulfilling all the backer orders (see below for a detailed financial breakdown), but with such huge interest we knew we would find a way to help us finish the process and grow as a company.”

Since this is the second most successful Kickstarter project, it could stand as one huge failure for the crowdfunding stalwart. It may soon be a necessity to have Kickstarter projects’ financials checked out and audited in public before a project can be funded. This kind of transparency may have saved us all from these kinds of huge failures.

I’m seeing countless stories, comments and emails about this massive project failure. As I learn more, I will provide you with those details. If anyone knows Simon Freedman, Please have him contact me. I have contacted Kickstarter for comments about this project but have not heard back yet.