I use a heck of allot of tools and utilities. I use tools for database access, process viewing, registry searching, debugging, error log parsing, mail connections and even four or five different types of FTP servers. I’ve even made a tool or two for you. I tend to prefer tools that are as cross-platform as possible and that generally stand the test of time. The better of them are ones that provide the kind of flexibility that they become something entirely new. Those are the tools that I’m interested in, and the ones I want to write about. Very few of the tools I use fit into the category of “That great tool” – one of them, though, is Total Commander.

So, let me take you back to the early nineties. I was using one of my first computers and it ran Windows 3.11 (for Workgroups) and my hard drive size was in the 200 megabyte range. I was an avid command line user and I found a great little tool called Windows Commander to manage the growing number of files that easily consumed the little space I have. The program was a cool visual representation of the file system that didn’t force me to click so many times (like I had to in File Manager). The interface was cleanly modelled after the DOS based application called Norton Commander. Windows Commander would later be renamed to Total Commander – written by Christian Ghisler.

This application stuck with me all the way from that beginning to now in every single incarnation of the program. I use it for so many things these days, that it’s hard to remember them all. One of the nicest things about Total Commander is that the shareware version of it is not limited in any way (in terms of features). You get the nag screen, but then get to use the application after that. If you’ve enjoyed the program for more than 30 days, you should decide to place a well-deserved order with the author (currently about $50.00 cdn).

The key here is versatility, here are some of the all-too amazing things I do with Total Commander:

What seems like the most innocuous feature ever is the most underrated feature of this (or any) file manager I have ever seen. I use this feature so much that I’ve added it to the toolbar of Total Commander for easy access. I simply highlight a file or a directory and click the icon and the filename and path are placed in the clipboard for use in any Windows application that requires a file name (such as: TOTALCMD.EXE). This saves me so much time clicking through folders in Windows, it’s insane.

Total Commander as it is can perform a number of simple compression tasks. Even better it can be extended to use others (such as WinRar). One of the more amazing things is that you have a tool extended so much that it can create multi-disk, password protected and self extracting archives with these tools too. This saves a heck of allot of time (especially when you may want to pull an infected file away from a system, but still keep it for later inspection). Having these options really make the various kinds of compression you handle faster.

I’m often in a bit of a rush, but I’d still like to know how much space a particular folder or directory is taking up on the file system. There are many ways to do that, but one of the quicker ways is using the {SPACE} key with Total Commander. Selecting the folder, hitting {SPACE} will get you a quick data calculation right under the “Size” column so you can decide what to do about the directory. This can be a bit tricky when you have text in the command windows below – so make sure the command window is clear before doing this. 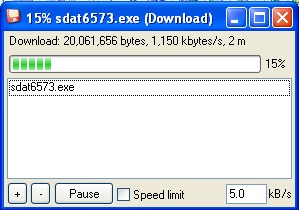 The FTP transfer interface (background, anyway), has evolved over time – but this simple interface is deceptive in how useful and powerful it is. One of the coolest (and probably unknown) features here is the ability to attach a speed limit to the transfer. In some cases, this feature alone has made me setup an FTP server over a LAN so I can impose a speed limit (thereby preserving bandwidth for the users on the network) during massive file transfers or backups. Also in the interface is the ability to add files to your transfer process without worrying about reconnecting.

That Pause button. I wish it was everywhere in Total Commander! As it is, you’ll find it on background and full file transfers, FTP transfers and probably a few places I’ve missed. You’ll appreciate this when you have multiple transfers of some sort going and want to get one finished first. Pausing things is such an elegant way of handing you limited network bandwidth, I don’t know why it’s not in every file manager.

Whenever files are involved, you know eventually the command line will need to be used for something. I confess, I most-often use the command line in Total Commander for quick access to the CMD in Windows. But, I will use it for a host of other things like: Access to shares (cd servershare), quick profile creation (using the runas tool), quick copy and paste commands (such as examples on the web), quickly navigating to a directory (cd windows – cd system32). It’s a shame Total Commander doesn’t support direct Powershell commands – but I’m sure that ill come along at some point.

All the common stuff Total Commander does can be done using keyboard shortcuts that are a million times faster than anything you’ll see somewhere else (if you get the hang of it). Among the most used shortcuts for me are SHIFT-F8 (full delete), F7 (Create Directory), ALT-F9 (Unpack All), F4 (Edit), CTRL-F (FTP Connect), F3 (View), TAB (Switch Source, Dest), F2 (Refresh), SHIFT-F6 (Rename File/Folder), ALT-ENTER (Properties of item). Of course, most, if not all these shortcuts can be re-defined.

Most folks could care less about reading any sort of documentation about an application, much less a file manager like this. But, one of the more amazing things about Total Commander is how well the author documents the changes and additions he makes to the tool. With every new version, the HISTORY.TXT is a plethora of information about what might have needed to be be fixed and new features you can try out or learn about. Often, when I have a few minutes, I take a close look at the reverse-chronologically listed text file for new developments. Great stuff.

Extending the usefulness of Total Commander is really easy, and the benefits are pretty quickly realized. Using the TC Powerpack extension allows you to use one common configuration base and skin Total Commander.  Using one of the many, many plugins, viewers, addons, etc also give you a way of doing almost anything. Really, you can use it to burn CDs, open a command prompt or do stuff like internally view databases (to name a few possibilities). Just incredible what’s possible.

An incredibly smart move on Christian Ghisler’s part, was starting to build a version of Total Commander for Android. Android is easily one it’s way to becoming the next Windows (in installed base anyway) and really can make use of a solid file manager like Total Commander. If you have an Android device, you can get a pre-release of the app here. I like the way he’s  chosen to preserve the right-left style of interface while making great use of the limited screen space. I haven’t seen it running on a tablet (or if it’s supported this way), but this tool looks like a real winner.

Those are some of the many features I make use of very often an why I generally have Total Commander running all the time on my Windows-based computer. Also, theres’ a huge list of features that I’m by no means coming close to covering. This tool is like the swiss army knife of Windows applications (to be sure).

Keep in mind too, that I’m an IT guy and a I’m in front of computers for the better part of a day. Given that I’m more of a power user than most shouldn’t deter you from checking this out yourself – especially if you’ve been interested in knowing more about file management and organization and/or the kind of stuff that takes up space on your system. Sure you can get nicer ways of calculating space, but Total Commander is one of those tools that should the base of your utility drive/cd/belt as you become more knowledgeable with technology.

I sure would love to know more about the kinds of utilities you count among the best of the best. It’s amazing to see what others use on a daily basis. Now, if only Total Commander could be directly ported to native OS X.