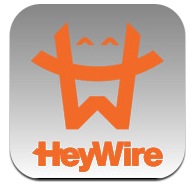 An interesting story (read it here) popped up over the last couple of days about a father who refused to pay a high Rogers cell phone bill. Alex Dunsmore’s son sent and received a large number of text messages with his girlfriend, who was using a free texting application. The application in question, HeyWire, is a US-Based free texting application that allows a user to text Canada for free – but the person replying must  text a US number in return. The fascinating thing about this scenario is that Dunsmore’s cell phone plan included “Unlimited” texting in Canada and his son’s girlfriend texted from an application she presumed was free. The question here is who’s on the hook for the extra charges? Should Dunsmore have been notified of these huge charges?

This story has a couple very interesting aspects. First, the users of the phone and application appeared to be unaware of the mounting charges incurred against them as Rogers did nothing to stop it. Secondly, this story (and others like it) underscore the increasingly obvious destabilization and data-centricity of phone services, while the big three (Rogers, Bell, Telus) in Canada continue to carry on business-as-usual.

The very idea of mounting charges on a phone bill, only to be charged by the company at the end of a monthly cycle aren’t new. In this case Rogers let it’s customer rack up a bill of about $400 for texts sent to an American number. The customer, apparently unaware of the error (believing he had been texting freely), refuses to pay the bill. It is generally in Roger’s interest to not inform people of erratic activity or overages because of the potential for large win-fall. For that reason, Rogers employs tactics like providing phone service but explaining little or nothing about online tools to show usage, nor do they sing you use r walk you through the use of these services. Other notable tactics I’ve seen are the injected Rogers notifications about Internet overages. They tell you that you’ve reached 75% of your account’s usage but leave out when the billing cycle will end. There is no question phone companies want these charges to happen because there is little liability to them.

Contrast this sort of thing with what banks and credit card companies do. Because of the possible high liability involved with erratic spending and fraud, banks and credit cards will immediately disable the use of a card when charges happen outside of certain established patterns, stores or locations. The banks will cut off your bank card even if you’ve recently been to a location that is suspected of wrongdoing (but have had no problems anyway). You might say the bank is providing a customer service, but you might also say they’re protecting their own backsides. Cases like the one described above should renew interest in exposing Rogers, Bell and Telus to enhanced liability if they don’t do enough to protect customers. If a pattern of activity is occurring, Rogers should have clearly made more effort to inform the customer and/or cut off the user (in case fraudulent activity was taking place).

The second, and notable part of this story, is the increasing ineffectiveness the big three phone companies are having with staving off destabilizing forces. The idea of a data-centric phone device is a not fantasy (I’ve written about that) and in time, more and more people will be interested in switching for the cost savings or efficiencies. Our phone companies don’t want that because they’ll lose large chunks of revenue – so they fight this change with everything they’ve got, but it’s always a losing battle. Some would say the collateral damage is the customer.

Another example of this losing battle – and specifically with Rogers: They’ve decided to close and/or convert all of the 460 video stores into wireless sales centers. Not only is this a clear sign of how slow Rogers is to acknowledge a destabilizing shift in the market, some might say they’ve done little to capitalize on what the market has shifted into (online streaming, online rentals).

Note: A request to speak with Alex Dunsmore was not immediately returned. I had hoped to ask him a few questions regarding Roger’s handling of the phone bill and his responsibility in the matter.There are clear opportunities to be had and powerful customer wins to be talked about if Rogers, Telus and Bell are to start embracing new innovations and stop punishing customers when they probably should be protecting them. If they were only half as aggressive about protecting a valuable customer as they are about marketing senior citizen phones to me, we all might be on to something.