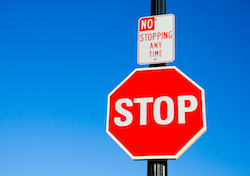 Summary: The bigger challenge when working with the intersection between technology and people, is the ability to gain clarity in any given situation. I look at how difficult it can be to gain it and how to improve on situations that lack it.

First, a small story. I’m watching an older man on a bus stands up from his seat to simply walk off. He’s at the front of the bus and past the white line. Agitated, the driver shouts “Get behind the white line!!”. The older man doesn’t make out the words the driver says and assumes she’s telling him that exiting the bus from the front is not allowed. As he’s walking away rather perplexed and the driver is trying to get him back to explain – I see this and prompt the man back to the front so the bus driver can make it clear what she was saying. He exits the bus from the front as he planned, with no one angry.

This is a perfect example of what goes on every day in our interactions with each other. Many times, it’s the simplest of misunderstandings and the fuzziness that comes afterwards that make it impossible to carry out very simple things. When we’re so unclear, often the first thing to go is courtesy and respect. People will get angry, frustrated and in rare cases – lash out and get violent. The lack of clarity in incredibly important conversations can be incredibly devastating.

In consulting, we often face great levels of pressure to perform things that others don’t completely understand (yes, they can begin and end the process completely in a fog because we’re the experts). Given that, customers rely on consultants to fix the issues and also explain what occurred it in a somewhat understandable way. When that breaks down, we face a blend of confusion, frustration and mistrust. To combat this very problem, CWL devised an extremely transparent way to combat a lack of clarity. When work is done for CWL’s clients, a detailed report is provided (take a look at a sample report here) outlining exactly what, why, when, how and for how long. Some of these detailed reports can stretch over multiple pages if the work warrants it.

The staggering thing to me, is the sheer number of cases that could have been easier to manage if everyone was clear about what they wanted or would give up. Often, pride or other notions get in the way of people saying some of the most useful and powerful words: “I don’t know”. Yes, even experts don’t know. Everyone has something to learn and I think clarity, not truth, should be our loftiest goal.

The next time you find yourself working with clients and are at an impasse, think about whether you’ve been clear enough or if you have help the other person better understand what you’re doing (or what you want) and you may find the process is much smoother. Another matter, but similar, is the ability to clarify things before a problem. Before approaching a project, be sure you have been clear about what you’ll do, possible foreseen issues and what the customer might expect. If you’ve done all this, expect the process to be smoother than ever.