While in the Dominican Republic I made it my personal mission to gain data access on my smartphone. Over the years, this process has become easier as the companies have accommodated smartphone users. With an unlocked smartphone, you can get reliable and useful pre-paid cell phone and data access in the Dominican. I’ve learned a few things along the way that you’ll want to know if you plan to do this.

Your phone is key

This probably goes without saying, but before you go anywhere, you have to be sure your phone works. Here are some key tips:

1. Your phone must be unlocked – Phones in Canada and the U.S. are usually locked to your cell provider if you bought it directly from them or on contract. One big exception is if you bought your phone directly from a manufacturer like Apple or Google. They usually sell phones considered “factory unlocked”.  If locked, you won’t be able to use a Dominican SIM card. You can have the mobile company unlock your phone for a fee, or use a third party to do so. The cost for this is anywhere from $15 to $75. You’ll have to take care of this before you bring the phone.

With those two covered, it was time to dive into understanding what was possible in the Dominican. This required a little more pre-trip research.

Coverage & Frequencies in the Dominican

As I was doing this, there were generally two major barriers. First, the Dominican is a Spanish-Speaking country, and much of the information you’ll find on the web is going to be in that language. And second, details can tend to get dated. This generally leads me to pursue information from the source websites of Cell Providers wherever possible.

The following are the main Dominican cell companies and frequencies they use. The best practice is to go after the largest two companies, Claro or Orange in rural areas. In Santo Domingo, all of these will be available.

Note: In the Dominican, the company Orange is referred to as Orange, and not the Spanish translation of the word: naranja.

In the Dominican, as a tourist, you’ll have no other option. As I understand it, Orange and Claro will not offer you post-paid options. When you arrive, there probably will be no cell company stores at the airport. I can confirm POP airport (in 2016) still does not have a location. Depending on where you arrive, you’re going to have to find a store location in the closest town. Choosing the store is always the best because they’ll have tools to cut your SIM card smaller (for newer iPhones) and do instant reloads if needed.

Getting a SIM Card

Your starting point for cell service in the Dominican is going to be buying a SIM card and activating it.  Be sure to BRING YOUR PASSPORT. You will need to show that to create an account. You will find people walking around selling Orange branded stuff or small stands (they kind of look like ice cream stands). Both of these sellers are at the low end of the system and sell only the “Orange tarjetas” (Orange card), they don’t sell or activate SIM cards. To start, you’ll have to visit a booth or store to get the SIM card. If you are looking for a location, look to any of the larger malls and supermarkets in the country. Orange has a large presence where there is a big population of people. Also, keep an eye out for other brands like Claro – you’re sure to find an Orange store close by if see a Claro store.

Once you have the SIM card and it is activated, be sure to test it in your phone. Don’t leave the store until you’re comfortable with the fact that the phone works.

With Orange (as likely with other cell providers in the Dominican), pre-paid service is used by the majority of the population. This provides a number of benefits to the generally poor masses who, if they may not be able to pay for more service, would just see their phones stop working until they start paying again. This is all achieved using the “tarjeta” (card) system. As a cell phone user, you would buy a card that has a set price attached to it, and then “add” that amount to your phone plan’s usable balance. The cards come in denominations of RD$30, RD$60, RD$100, and RD$300. For most cell users, RD$30 is the commonly used card as rates are quite low for local calls.

The truly amazing thing about the cards is that you can get them everywhere. In every tier of the distribution system, cards are available. You can find them in any of the following places (some locations may only have one denomination, so look around):

1. Street salespeople (they come up to your car at street lights)
2. Small stores, convenience stores
3. Small booths at the sides of roads
4. Booths inside of bus terminals
5. Branded Stores 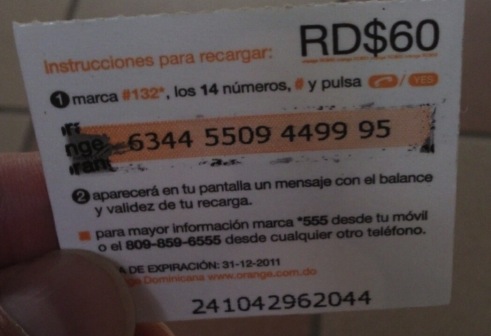 You can generally expect to see cards anywhere you see other stuff being sold. Just ask for the “Orange tarjetas” or look for the Orange logo. You’ll generally find these cards away from the cell companies’ stores. The standard process you follow to recharge your phone and/or data package is written on the back of all orange cards. To do this, make sure you have the SIM card you are trying to recharge in your phone, and the phone is powered on.

Given all the above details you should now be ready to travel to the Dominican with your unlocked phone and enjoy local service at a dirt-cheap rate. If you are one of the unfortunate folks paying one of our big phone companies for long-distance access, stop! You do have options. As always, your thoughts, ideas, questions and corrections are always appreciated! A special thanks to those at DR1 for helping in my quest to find data and phone access in the Dominican!