Those of you who read this blog probably think I favor the PC for all things software. Well, that may seem true now, but it’s about to change. In previous “THAT great tool” editions I have sung the praises of tools like TrueCrypt, Ghost, KeePass, Total Commander, and even IFTTT. Clearly, a MAC OSX only tool is not being represented here. Well, for those fans of Total Commander (you know how I feel about that), I have a great OSX tool to show you today. This tool is a Open Source file manager created in the same light as Total Commander. As always, these tools are the kinds of utilities you’ll want to have access to every day if you’re a consultant or a power user.

I came across Double Commander (download here) as I was looking for a decent file manager on OS X. I’m pretty biased towards the “Norton Commander” type of interface, so I wanted something that might have a similar type of interface. I’ve really never been a convert to the world of Explorer and Finder, either – I find those tools tend to be built to inhibit efficiency, not improve it.

Here are some of the file managers that didn’t make the cut:
Total Finder  ($18.00) – Nice interface and the tabs are cool, but I wasn’t looking for just a souped up version of OSXs Finder.
Forklift ($29.95) – A pretty file manager with a number of features (including the nifty application deleter), but I still wasn’t as impressed as I wanted to be.
Free Commander
muCommander (Open Source) – Nice two-pane file manager, though I felt the file transfer features needed work
Disk Order ($29.95) – Frankly, felt a little too much like Finder for me
Xfolders (Open Source) – Nice set of features in this application – but I struggled with getting the interface to look usable

It’s worth mentioning that any one of these applications could be the one for you. Sometimes this is simply a preference and you may like one of the above tools more than the one I’ve chosen. Do yourself a favor at take a look at them all. 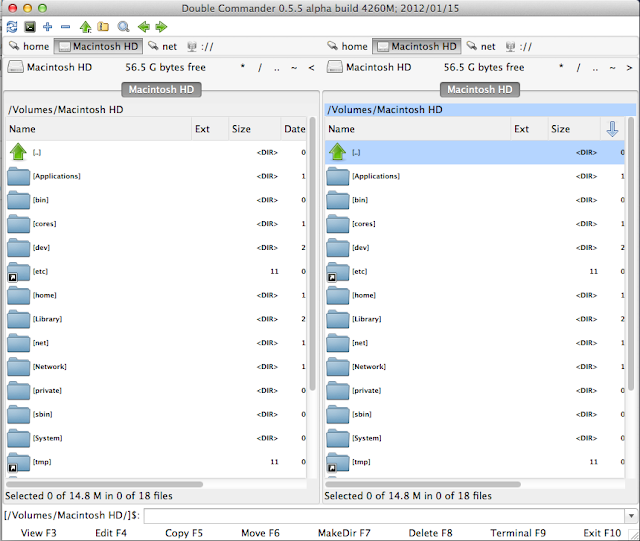 What makes Double Commander awesome? Well, the interface consists of two panes (you knew that) – a source and destination. This lets you work with files in two places – often either copying them or moving them. This simplicity is what drives an amount of file management (in my opinion it greatly improves upon the Explorer and Finder interfaces). You generally will select something in either the left or right side of the screen and run some kind of operation. Often a hotkey will also apply, making things faster (like using F5 to copy whatever you’ve selected).

Many of the dialogs perform in a similar manner as Total Commander too. That may or may not be a good thing – but in my opinion, it just makes the process of getting things done faster across platforms. Often the features aren’t exactly the same, but they are similar enough that you’ll get up and running quickly.

While it isn’t as mature or rock-solid as Total Commander on Windows, you’ll find that Double Commander performs admirably on OS X. Double Commander is the kind of tool you’ll want to keep running in the background (and the nifty feature to keep the app’s icon in your tray helps).

A tool like this is exactly what you’ll need on OS X to get things done as efficiently as possible and move on to the next thing. It would be nice to have a place where I could see something like Finder’s favourites in the interface somewhere, but that’s just nitpicking. Double Commander is a keeper as far as I’m concerned. Do you have a favorit file manager on OS X?